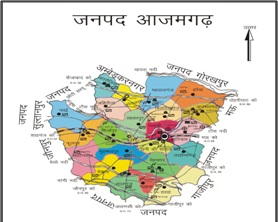 Azamgarh, one of the easternmost districts of Uttar Pradesh,once formed a part of the ancient Kosala kingdom, except its north-eastern part. Azamgarh is also known as land of the sage Durvasa whose ashram was located in Phulpur tehsil, near the confluence of Tamsa and Majhuee rivers 6 kilometres (3.7mi) north of the Phulpur tehsil headquarters. The district is named after its headquarters town, Azamgarh, which was founded in 1665 by Azam, son of Vikramajit. Vikramajit was a descendant of Gautam Rajputs of Mehnagar in pargana Nizamabad, who like some of his predecessors had embraced the faith of Islam. He had a Muslim wife who bore him two sons Azam and Azmat. While Azam gave his name to the town of Azamgarh, and the fort, Azmat constructed the fort and settled the bazar of Azmatgarh in pargana Sagri.After the attack of Chabile Ram, Azmat Khan fled northwards followed by the interior forces. He attempted to cross the Ghaghra into Gorakhpur, but the people on the other side opposed his landing, and he was either shot in mid stream or was drowned in attempting to escape by swimming. 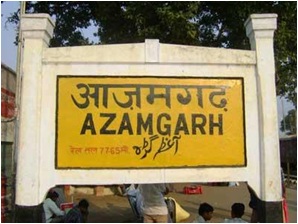 In 1688 A.D. during Azamt's lifetime, his eldest son Ekram took part in the management of the state, and after Azam's death he was perhaps left in possession together with Mohhabat, another son. The remaining two sons were taken away and for a time detained as hostages for their brothers' 'good behaviour'. The successor of Ikram finally confirmed the title of his family to the Jamidari. Ikram left no heirs and was succeeded by Iradat, son of Mohhabat. But the real ruler all along had been Mohhabat, and after Ikram's death, he continued to rule in his son's name.

Quickly Find What You Are Looking For